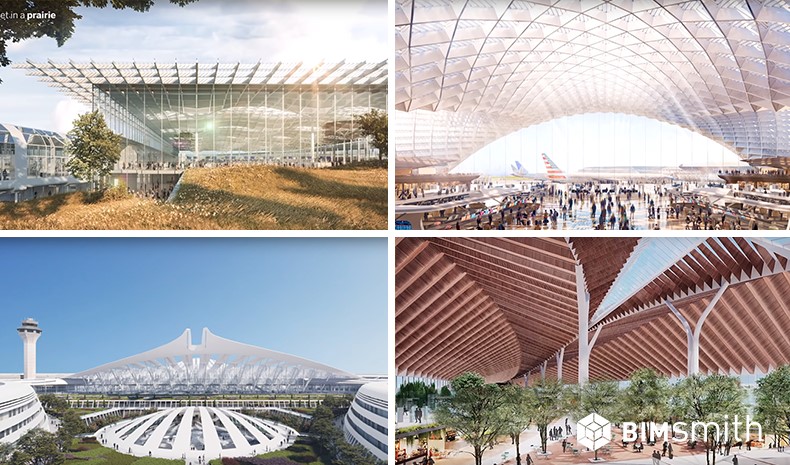 The top 5 finalists for O’Hare International Airport’s renovation project have been announced, and the submissions are worth a look.

ORD21, the name for the international design competition to design what might arguably be the most significant infrastructure upgrade Chicago has seen in decades, has drawn eyes from all around the globe for the $8.5 billion project.

The focus falls on Terminal 2 at O’Hare, an aging relic of the 1960’s that the city wants to replace with a “21st-century global terminal” and two satellite terminals that can once again make Chicago proud of its largest airport.

The project, slated to be completed in 2028, would boost O’Hare’s total terminal square footage by around 60 percent, from 5.5 million to almost 9 million square feet.

For context, that’s like adding Chicago’s Midway Airport to what already exists at O’Hare.

The new terminal is intended to house both domestic and international flights, along with its own customs and immigration checkpoints.

Although each of the five proposals has taken a different approach to the unique needs of the project, they all seem to agree on at least one thing. Each design has incorporated a central element of greenery – something that, if you have ever been to O’Hare, would bring much-needed relief to the bleak expanse of concrete as we know it today.

The competition also asked the architects to plan for the future "O'Hare Express," the downtown-to-O'Hare hyperloop venture privately funded by Elon Musk (of Tesla, SpaceX, SolarCity).

The 5 Finalists for the 2019 O’Hare Airport Design Competition

Each submission has a one-minute video highlighting their concept for a re-envisioned O’Hare.

From the firm: "The Fentress-EXP-Brook-Garza Joint Venture’s globally-minded terminal design for Chicago provides an elegant, spacious, and sustainable gateway to connect Chicagoans and the world with speed and efficiency. Soaring spaces sparkle with sunlight and lift the human spirit. Daylight and spatial composition guide passengers intuitively and purposefully. The latest technological advances shape a smart, seamless, comfortable, and unencumbered experience. From arrival to departure, every element of the new terminal is crafted to elevate the passenger, making their journey inspiring, engaging, stirring, and fun. Our vision is to return the romance of air travel to all who pass through Chicago’s O’Hare."

From the firm: "Our design is based upon a sequence of memorable and distinctive spaces that create a gateway to Chicago with architecture that is open, transparent, inclusive, welcoming and functional, in turn resolving the sophisticated security, airport and airline requirements in a way that meets the needs of both employees and passengers. Three arches frame the landside of the building, merging into a grand single arch on the airside, thus dissolving the barrier between inside and out and allowing the spectacle of the airfield to be visible to all who pass through the gateway, and recapturing the romance associated with air travel."

From the firm: "Chicago is a city defined by motion; confluence – of our river, of trail networks, of railroads – has shaped our most vibrant civic spaces. Studio ORD’s elegant and efficient design for the O’Hare Global Terminal and Global Concourse unifies the airport’s campus by converging seamless lines of motion across three terminals around a spectacular central Oculus. This confluence becomes Orchard Field - a vibrant neighborhood that combines abundant green spaces with distinctive landmarks, bespoke retail pavilions, and diverse activity zones. Richly layered and easily navigable, it captures the unique character of Chicago and redefines O’Hare as a 21st century international destination."

See more from the designers: SOM

From the firm: "We have delivered global excellence in this great city, shaping Chicago’s skyline, neighborhoods and public realm for more than 80 years. It’s said that our Chicago buildings turn "pragmatism into poetry."

We infuse the muscular heritage of Chicago architecture and engineering with many lessons from the natural environment, to increase human comfort, save energy and define a distinctive sense of place.

This can be Chicago’s next great building and our new gateway to the world."

See more from the designers: Santiago Calatrava Architects and Engineers

From the firm:  "O’Hare’s Global Terminal by Santiago Calatrava is a masterwork of modern terminal architecture. With a glass façade and dramatic shell-like roof soaring over the approach road, the building unifies the terminal complex while establishing itself as its centerpiece.

Inside, vaulted, light-filled spaces celebrate both the grandeur and simplicity of bygone travel as customers move easily to and from gate areas enlivened by Chicago-focused concessions in an airy, park-like setting.

Convenient links to adjacent terminals, satellite concourses, and public transit support a future Vision plan that transforms the area opposite the Terminal into a vibrant hotel, retail and business complex."

Of course, public feedback across various news outlets and social media (the most reliable sources for architectural critique) is varied. While the form is certainly there, many wonder about the different concepts’ understanding of key functions of an airport like O’Hare. Getting it wrong could be a nightmare for Chicago, its residents, and travelers all over the world. 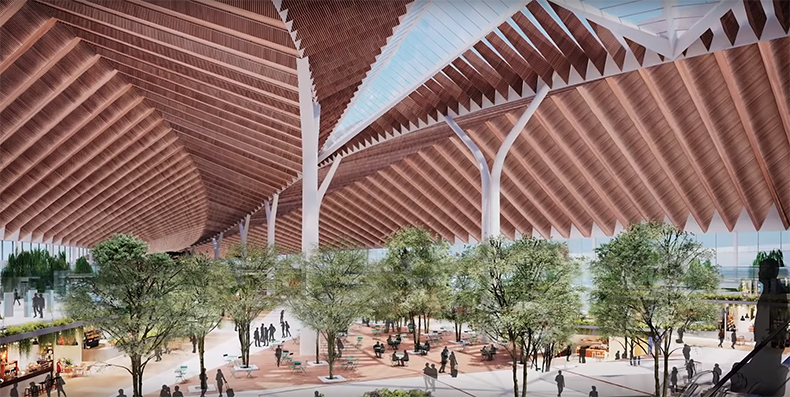 Chicago has openly requested public feedback on the designs, both from city residents and travelers around the world. According to Chicago Mayor Rahm Emmanuel, “To my knowledge, this is the first time any terminal has ever been submitted to the public for commentary and for vote.”

You can view each design and submit your thoughts via a five-question survey at the Chicago Department of Aviation website here. January 23 is listed as the final day for submission.