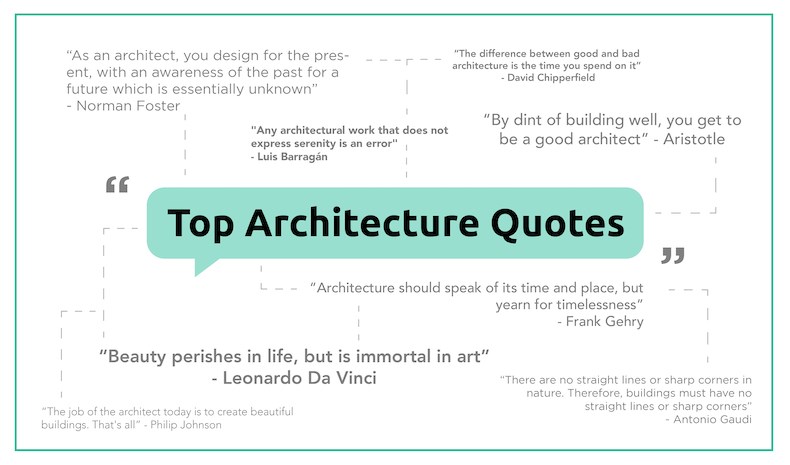 There are all kinds of inspirational quotes about architecture out there. We've compiled some of the best architecture quotes from famous architects for you to enjoy.

First, we have a list of our Top 10 Architecture Quotes, followed by an index of the most popular architect quotes from around the internet.

Have a quote about architecture that we missed? Let us know in the comments!

The following top 10 quotes about architecture from around the internet are in no particular order.

1. "Architecture is basically a container of something. I hope they will enjoy not so much the teacup, but the tea."

2. "A profound design process eventually makes the patron, the architect, and every occasional visitor in the building a slightly better human being."

3. "A doctor can bury his mistakes but an architect can only advise his clients to plant vines."

4. "To create, one must first question everything."

5. "We shape our buildings: thereafter they shape us."

6. "When we build, let us think that we build forever."

Top Quotes About Architecture (All)

“Architecture should speak of its time and place, but yearn for timelessness.”

"Any architectural work that does not express serenity is an error."

"Whatever good things we build end up building us."

"We do not create the work. I believe we, in fact, are discoverers."

"The door handle is the handshake of the building."

"God is in the details."

"Even a brick wants to be something."

"A room is not a room without natural light."

"The Sun does not realize how wonderful it is until after a room is made."

"A design isn't finished until someone is using it."

"Everything is designed. Few things are designed well."

"Practice safe design: Use a concept."

"Architecture is a dangerous mix of power and importance."

"Good design is all about making other designers feel like idiots because the idea wasn't theirs."

"Good architecture is like a good therapy session, a good marriage, a good poem – gently and almost invisibly allowing you to be you, as flawed and as beautiful as you are."

"In pure architecture the smallest detail should have a meaning or serve a purpose."

"The most innovative designers consciously reject the standard option box and cultivate an appetite for thinking wrong."

"Architecture never derived its force from stability of culture, but rather from the expression of those moments when that sense of stability slipped."

"I've noticed the computer sometimes leads to rather bland decision-making; Now, anybody can do a wobbly, blobby building."

"I like ruins because what remains is not the total design, but the clarity of thought, the naked structure, the spirit of the thing."

"A doctor can bury his mistakes but an architect can only advise his clients to plant vines."

"Design is where science and art break even."

"Hell, there are no rules here; We're trying to accomplish something."

"A profound design process eventually makes the patron, the architect, and every occasional visitor in the building a slightly better human being."

"Light, God's eldest daughter, is a principal beauty in a building."

"Architecture arouses sentiments in man. The architect's task, therefore, is to make those sentiments more precise."

"The desire to reach for the sky runs very deep in the human psyche."

"I'm convinced that without bad design, the world would be a far less stimulating place; we would have nothing to marvel over and nothing to be nostalgic about."

"Architecture is not based on concrete and steel, and the elements of the soil. It's based on wonder."

"Very often the opinion of the clients must be disregarded in their own interest."

"We shape our buildings: thereafter they shape us."

"Architect. One who drafts a plan of your house, and plans a draft of your money."

"Architecture is basically a container of something. I hope they will enjoy not so much the teacup, but the tea."

"The fundamental failure of most graphic, product, architectural and even urban design is its insistence on serving the God of Looking-Good rather than the God of Being-Good."

"When we build, let us think that we build forever."

"I don't know why people hire architects and then tell them what to do."

"There is a danger when every building has to look spectacular; to look like it is changing the world. I don't care how a building looks if it means something, not to architects, but to the people who use it."

"It’s kind of fun to do the impossible."

"The first gesture of an architect is to draw a perimeter; in other words, to separate the microclimate from the macro space outside. This in itself is a sacred act. Architecture in itself conveys this idea of limiting space. It’s a limit between the finite and the infinite. From this point of view, all architecture is sacred."

"Architecture can't fully represent the chaos and turmoil that are part of the human personality, but you need to put some of that turmoil into the architecture, or it isn't real."

“Recognizing the need is the primary condition for design.”

“To create, one must first question everything.”

"For the most part things never get built the way they were drawn.”

John Mercer Johnson was a lawyer, not an architect. Completely changes the meaning of this quotation: "Very often the opinion of the clients must be disregarded in their own interest."